Have you ever wondered where all the salt goes after the snow and ice melts from the roadsides and sidewalks? It turns out, most of the salt runs into the storm drain, but some salt will end up along the roadsides and boulevards in green areas.

A study by Biesboer et al. found high salt concentrations of 12,000 ppm three meters from the road (1994). High concentrations of sodium chloride (NaCl), such as these, cause yellowing of leaf tips, poor cell membrane stability, and plant death in turfgrass. This means those patches of dead turfgrass along the roadsides in the spring could be due to too much salt in the soil. High salt concentrations are not the only stress plants experience on roadsides; they must also survive prolonged periods of ice cover in the winter and heat stress in the summer. Previous research has indicated that tall fescue has the highest relative salt tolerance compared to other cool-season grasses, but may not be well suited for roadsides due to these other stress factors (Friell, et al., 2013). Since then, turfgrass breeders have released new cultivars that show potential for use on roadsides. Our team of turfgrass researchers chose to evaluate these newer turfgrass cultivars based on their performance under varied levels of salt stress so that we could make recommendations for turfgrass managers with saline soils.

We examined 38 cultivars and accessions across 15 turfgrass species that demonstrated potential to perform well on roadsides. The plants were evaluated in a hydroponic system to eliminate variability often seen in field trials, such as air temperature, soil composition, rainfall, etc. In total, 4 concentrations of salt were used that captured the range of salt concentrations seen in Bieseboer et al. (1994). We quantified plant performance under salt stress by calculating change in percent green cover to see how quickly and to what extent leaf tissue yelllowed. We also measured the normalized difference vegetative index (NDVI), a general measure of plant health, and the cell membrane stability using an electrolyte leakage assay (Verslues, et al., 2006) that measured the uptake of salts into plant tissue.

We found that tall fescue and perennial ryegrass maintained the highest percent green cover (Figure 1), NDVI and lowest electrolyte leakage throughout the experiment, which was consistent with previous research. We also found that smooth bromegrass, hard fescue, blue grama and prairie junegrass performed the worst at all salt concentrations using the same measurements. Significant differences between cultivars within species were observed in slender creeping red fescue (cultivars ‘Sea Mist’  and 'Sprinkler') and prairie junegrass (cultivar ‘Barkoel’ and ecotype Minnesota). Surprisingly, the percent green cover of alkaligrass, which is considered to be salt tolerant, was not significantly different than most of the other grasses, even under moderate salt stress. However, at the highest salt concentrations, alkaligrass maintained significantly higher percent green cover than all other species except tall fescue. This could indicate a species-specific response that allows the plant to persist in saline conditions by maintaining better electrolyte balance within the plant cells. These results show that choosing the right species is extremely important and proper cultivar selection, while less significant, can improve the overall turf stand. Choosing species and cultivars with low salt tolerance will result in a poor turf stand in saline soils. 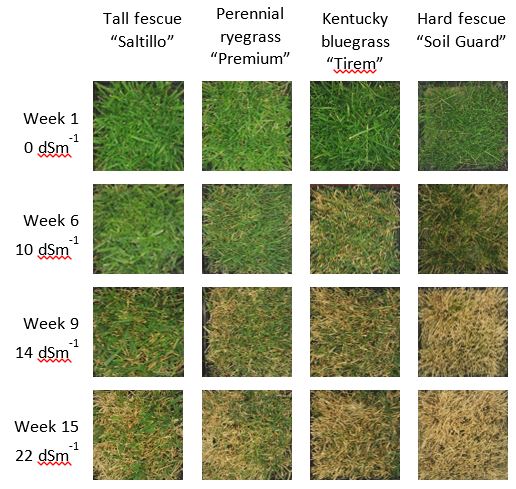 Figure 1. Representative images of 4 species and how they performed over time. Week 1 was at the beginning of the experiment before any salt exposure. Week 6 through 15 were the cumulative exposures to salt stress from low to high concentrations.

More research needs to be done on both tall fescue and perennial ryegrass before any recommendations can be made, primarily because they may be susceptible to cold temperatures, ice cover, and heat, which would affect their long term viability on roadsides. Additionally, possible interacting effects among these different environmental stresses could cause species to be more sensitive to salt stress. This experiment will help guide homeowners and turfgrass managers with saline soils decide which grasses to use for specific sites. A full list of species, cultivars, and their performance under saline conditions will be available later in 2018.