Previously I wrote about the different renovation options for fall seeding of lawns and about the various attributes of cool-season lawn grasses.  This week I wanted to discuss the mixtures and blends of grass seed that are on the consumer marketplace.  If you’ve ever walked into your local big box store or garden center looking for grass seed, the different products available can be fairly intimidating.  To be honest, I often have a difficult time finding the right mixture, because it only takes one bad ingredient to produce a poor quality lawn.  With that in mind, let’s take a look at several categories of grass seed mixtures that are available to you.

Many companies sell seed mixtures under these names.  Generally, these mixtures will contain a large percentage of Kentucky bluegrass, with perennial ryegrass and strong creeping red fescue included.  For existing average quality lawns this is a good mixture of species, and chances are your lawn already has some of these species established.  Perennial ryegrass will be the first species to germinate, generally 3-5 days after planting, and the other species will fill in over a 10-30 day period.  Bluegrass and ryegrass do not perform well in the shade, so creeping red fescue is a great addition to this mix for its shade tolerance.  Below are three examples of these mixtures. 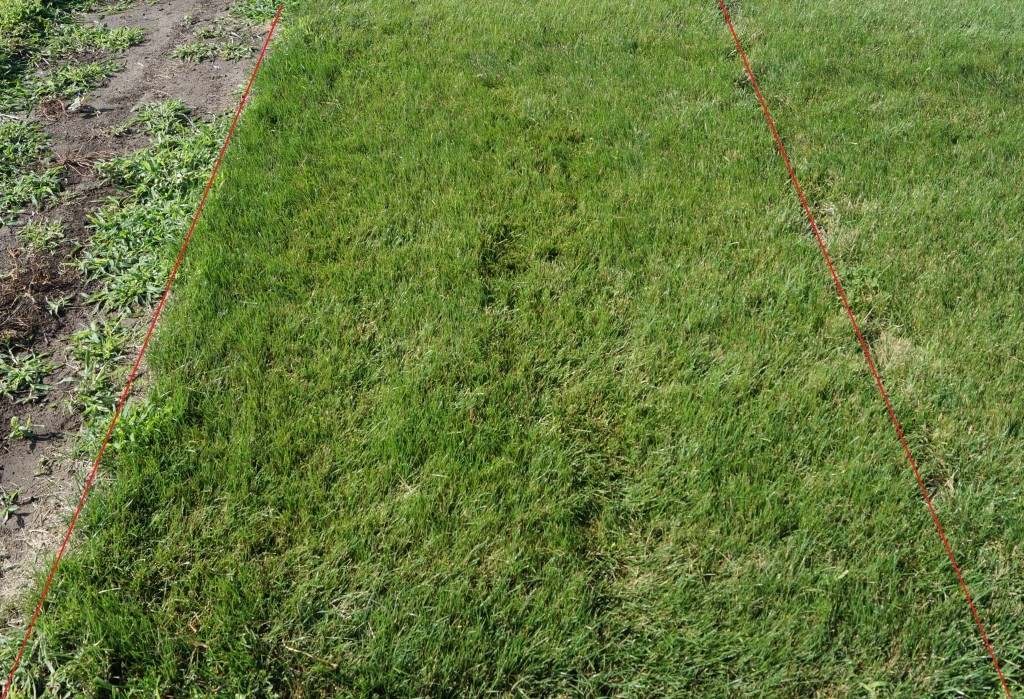 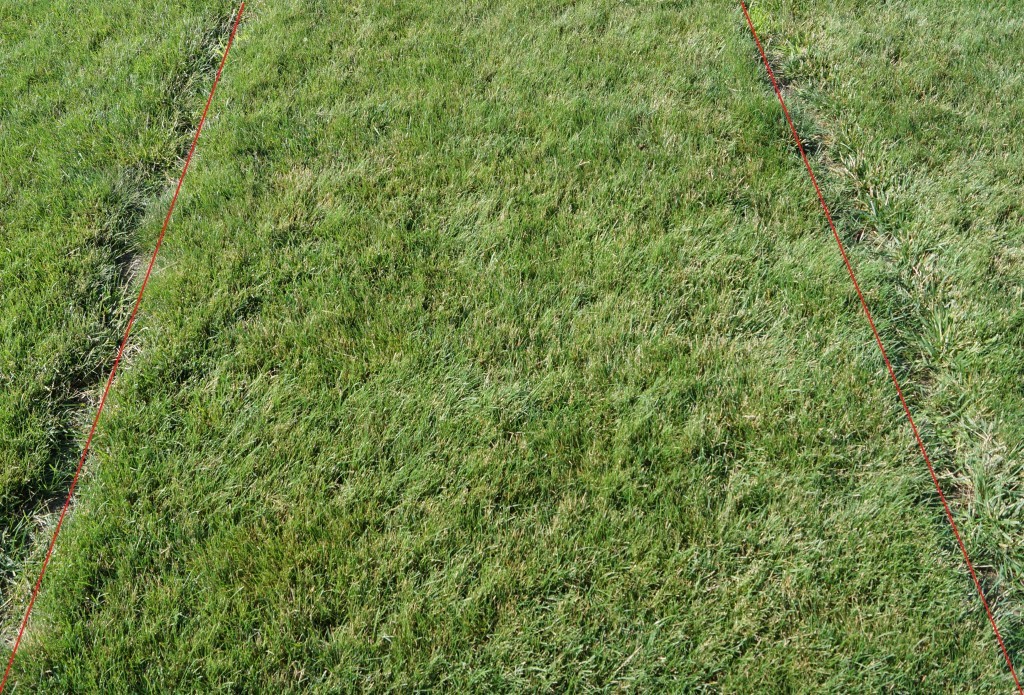 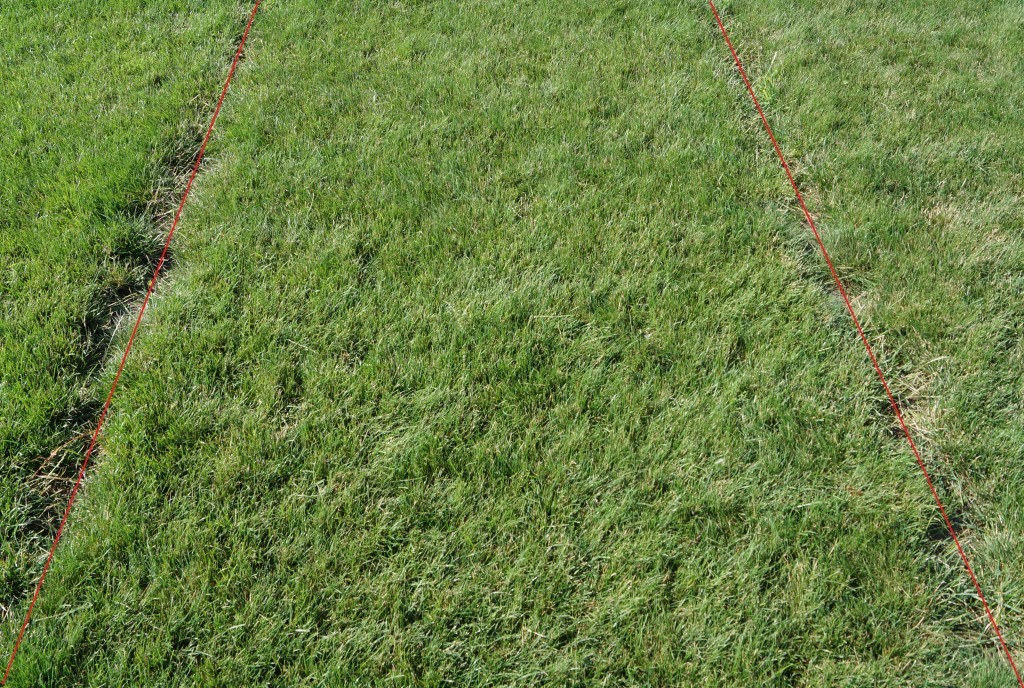 The mixtures above would be consider standard lawn mixtures for Minnesota.  You will notice that two of the mixtures have annual ryegrass included.  Ideally I suggest to choose mixtures without annual ryegrass because it will compete with other grasses during establishment and it will not persist for longer than one year.  However, the inclusion of a small percentage of annual ryegrass in a seed mixture will not cause long lasting issues in lawns.

In a perfect world there would be consistency among species that are included in shade grass mixtures, but this is not the case.  Many companies will label mixtures as shade tolerant, but the species included do not reflect our knowledge of which grasses are better adapted for the shade.  There are no criteria for what can and can’t be labeled as a shade mixture, so this is very much a buyer beware situation.  Below are three examples of shade or dense shade mixtures. 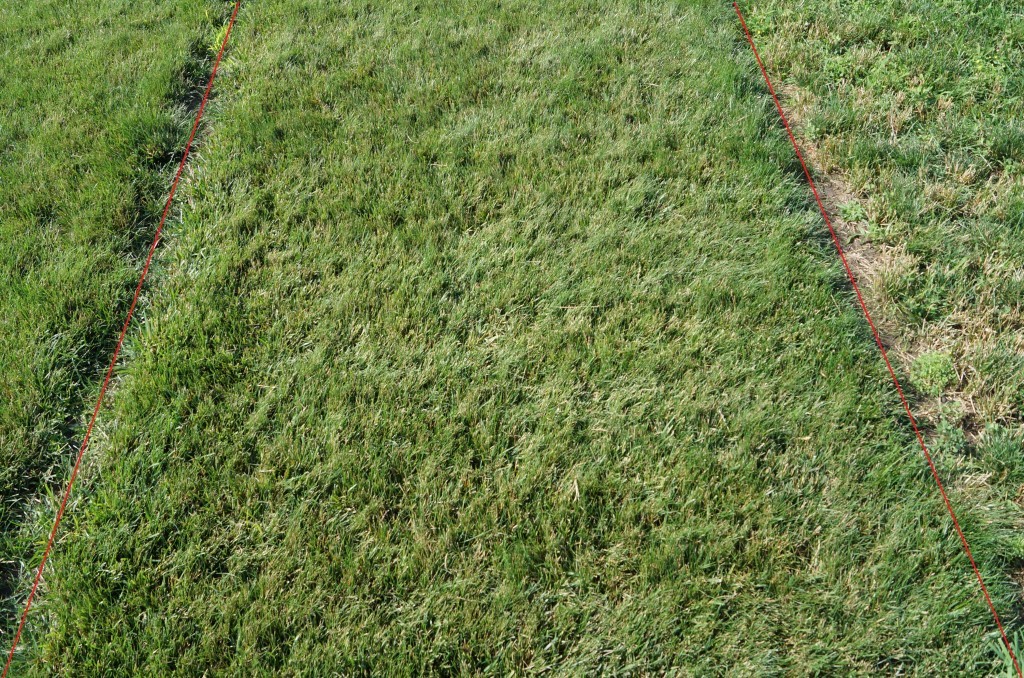 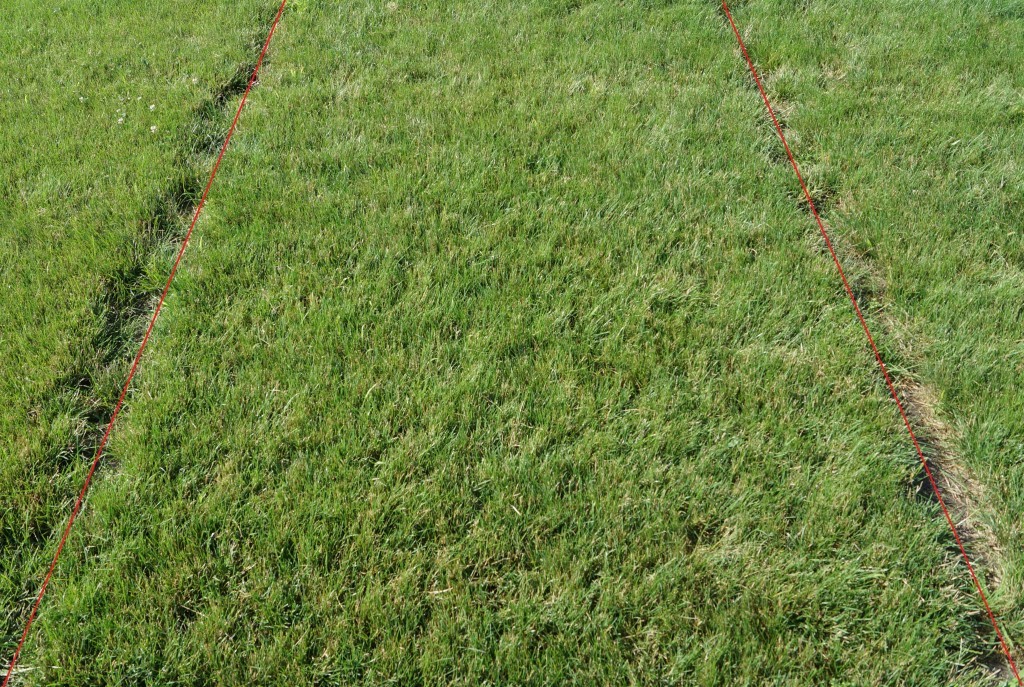 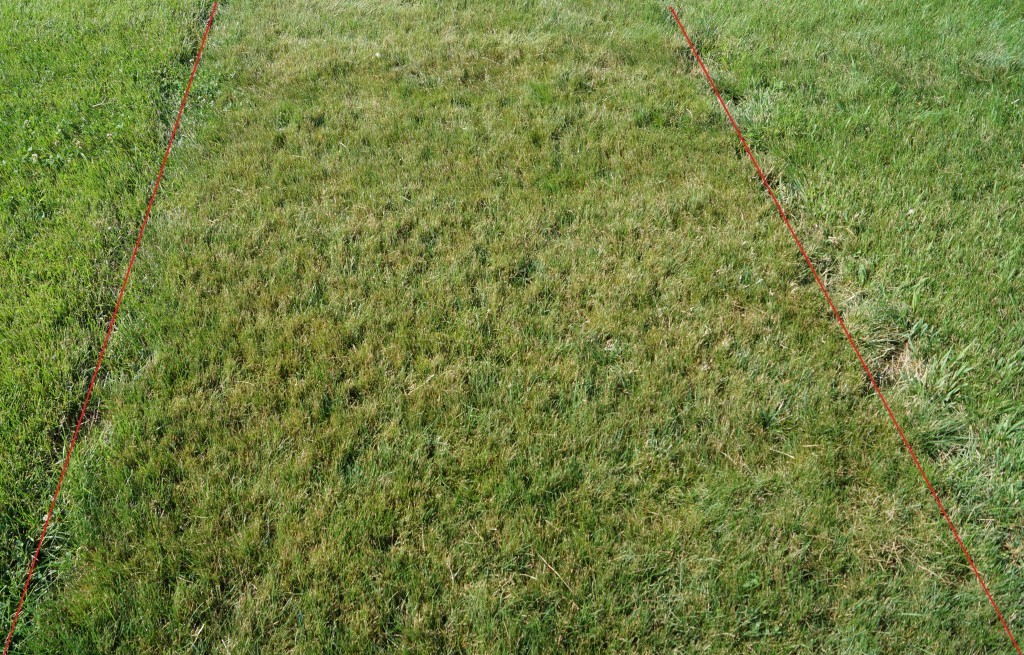 The Dense Shade mixture from Pennington Seed includes tall fescues (coarse type) and fine fescues; these species are well adapted to shaded environments and ultimately this mixture should have good performance.  Keep in mind that tall fescue is a coarse textured bunch-type grass and it can be unsightly when seeded into existing fine textured grasses, but if you’re looking for nice green color and healthy grass in the shade, this mixture will meet your needs.  The Shade Grass mixture from Performance Seed has almost 50% annual ryegrass and 30% perennial ryegrass, which are not shade tolerant grasses.  Finally, the Ultra Dense Shade Mix from JRK Seed has four different fine fescues, which are shade adapted, and almost 20% Poa trivialis (rough bluegrass) and 10% perennial ryegrass. This mixture will grow well in the shade, but in full sun situations the Poa trivialis will become stressed and brown out in the summer (as seen in the picture).  I often caution homeowners about using mixtures with Poa trivialis because it can escape and establish into full sun areas, eventually forming distinct patches that resemble disease.  This mixture should only be used in dense shaded situations where other grasses will not grow.

Sound too good to be true?  Generally it is.  Quick repair mixtures include large percentages of annual ryegrass, which does not persist in lawns for longer than one year.  I suggest to avoid using these mixtures.  Below is an example of this type of mixture. 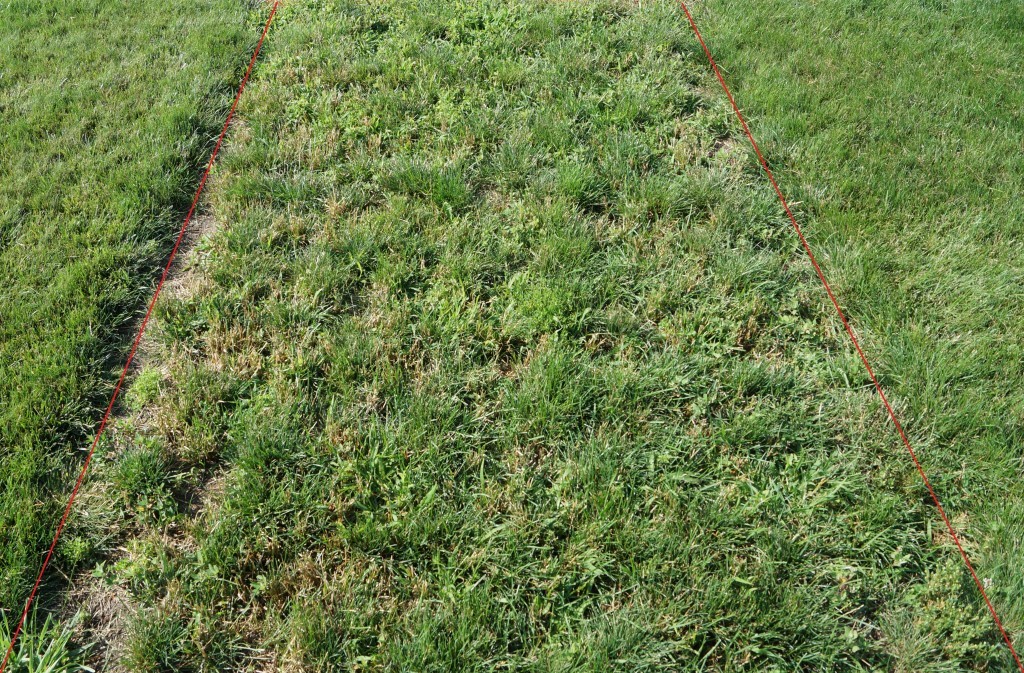 If you look hard enough, you’ll notice newer mixtures of grass seed emerging on the marketplace.  Two of my favorite products in this category include blends of tall fescue and mixtures of fine fescues.  Blends of tall fescue generally include 3-4 varieties, and these blends are great for new establishments of low maintenance areas, high traffic and shaded environments.  Mixtures of fine fescues are often called “low growing” or “no mow” mixtures.  These mixtures are great for low maintenance situations where less mowing is desired.  The fine fescues will blend in well with existing grass species and are adapted to the shade.  Don’t let the name of the mixture fool you, these grasses can also be mowed at standard lawn heights.

High traffic mixtures often include a large percentage of perennial ryegrass, which will tolerate traffic much better than other species.  However, perennial ryegrass can suffer significant winter injury in Minnesota, so keep that in mind when using these mixtures.

Grass repair kits, which are used for overseeding bare patches in lawns, often include similar species as the Midwest Mixtures or Northern Blends.  Most of these kits include 10-20% seed and 80-90% paper mulch.  The mulch can aid in establishment by holding moisture and preventing the seed from drying out, but keep in mind that you are only paying for a small amount of seed.  In turn, the seed cost per pound can be rather expensive.  The Dog Patch kit from Amturf costs $40.38/lb of seed and the Grass Repair Kit from Encap, LLC costs $12.22/lb of seed.

We’ve all seen the advertisements for “the best grass seed ever” and “plant it and forget it” mixtures.  Much like the dense shade mixtures, these are buyer beware situations.  Here is some of the language you might see on the bag of seed:

Some examples of these mixtures include Bob Villa’s Grassology and Cutting Edge Grass Seed.  What do many of these mixtures have in common?  After reviewing of these products I’ve come to find many similarities: 1) Most of them have at least five species, generally more.  Companies do this to be sure they have something that will grow anywhere, but the result is often less than satisfactory.  Also, while diversity is good, you don’t know what you’re getting because varieties are often not stated.  2) It can be difficult to find the seed label and the species included.  3) Many have 50%+ inert matter or seed coating, which reduces the cost to the manufacturer and transfers it to you.  4) These can be some of the most expensive seed mixtures. 5) Claims are rarely backed by any science and/or data.

Purchasing high quality grass seed is one of the most important considerations when overseeding, renovating, or establishing new lawns.  This two-part article should help to give you more direction when you venture to the store and gaze at the seemingly endless isles of lawn seed.  If you are unsure of whether a particular mixture is right for you, be sure to ask someone or do some investigation.  For more information on purchasing and planting grass seed, have a look at these resources:

Where to purchase grass seed

Repairing or renovating an existing lawn