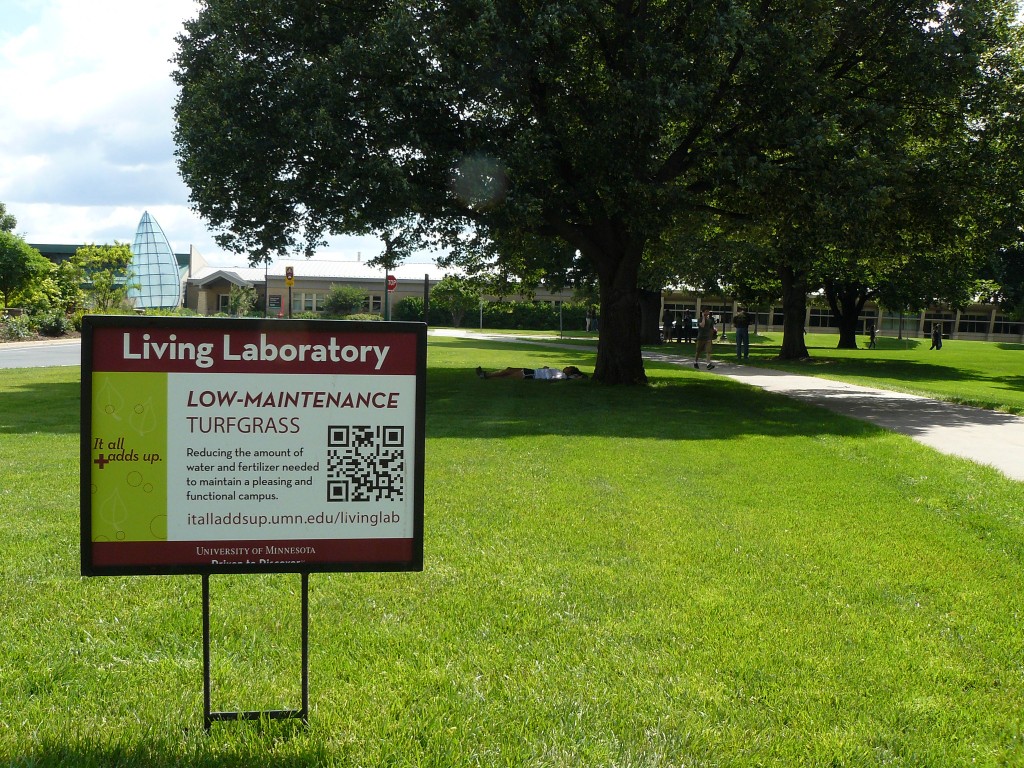 Climate change is a serious environmental issue that will continue to cause widespread concern around the globe. As the amount of carbon dioxide, nitrous oxide, and methane increase in our atmosphere, the ongoing effects of higher temperatures will become more apparent. We have already seen certain trends occurring that scientists have attributed to climate change, such as more frequent droughts, higher sea levels, melting glaciers, and shifting plant and animal ranges (IPCC, 2007). Society can help to help mitigate the effects of climate change in two ways. One is the reduction of greenhouse gas emissions, and the other is the sequestration of carbon dioxide within natural or artificial reserves.

Turfgrass is often seen as a high input landscape feature and as such has acquired a bad reputation because of the negative consequences associated with high input management. Fertilizer and pesticides applied in excess can run off turf areas and contaminate local waterways. Additionally, lawn mowers, aerators, and other turf maintenance equipment release greenhouse gasses into the atmosphere. Despite these negative impacts, turfgrass actually has the potential to offset emissions by sequestering carbon dioxide. Through the process of photosynthesis, all plants remove carbon dioxide from the air and utilize it to form new growth, including root mass. As turfgrass roots die, they decompose into soil organic matter, fixing carbon in the soil. In this way, turf areas can sometimes be carbon sink for greenhouse gases rather than a source.

Recently, some significant research has been conducted that has shown encouraging results regarding the ability of turfgrass to sequester carbon. One such study used a model to examine the potential for carbon sequestration on home lawns, and found that lawns are able to sequester anywhere from 25.4 to 204.3 g C/m2/year (Zirkle et al., 2011). Though this is only a small fraction of the amount emitted by the United States each year (EPA, 2013), if all or most turf areas were able to sequester this amount, a significant difference could be made in the net carbon emission of the United States. Kong, et. al. (2014) found that athletic fields, parks, and university campus lawns also had the ability to sequester more carbon than they emitted. However, this study also pointed out that there are limitations to how much carbon soil can hold, and as such turf areas can only sequester carbon for a certain amount of time. Finally, a study conducted on home lawns around the U.S. also found that these areas could sequester more carbon than they released, but on average became net carbon sources after 184 years, as the soil ceased to be able to hold additional carbon, but maintenance activities continued (Selhorst and Lal, 2012).

These studies show that turfgrass areas do indeed have the potential to sequester more carbon than they emit, therefore at least not contributing to the problem of global warming. However, after a certain amount of time turfgrass becomes a net source of greenhouse gasses when the soil reaches its carbon storage capacity. The length of this time period depends on many factors, such as soil type and climate, but especially on maintenance practices.  More research is needed on what environmental conditions result in the maximum amount of soil carbon storage, but individuals can take immediate action on their own by choosing to plant a low-input turfgrass species, which will reduce emissions from maintenance. This will increase the likelihood that your turf area will be a net sink for carbon for a longer period of time; while this by itself will not solve the problem of global warming, it at least can help reduce it.

EIA. 2013. What are greenhouse gases and how much are emitted by the United States?. EIA: Energy in Brief.

IPCC. 2007. Contribution of Working Group II to the Fourth Assessment Report of the Intergovernmental Panel on Climate Change, 2007. IPCC.