Rethinking the value of golf using an ecosystem services approach: From the Minneapolis-St. Paul Region to cities in general

There are approximately 16,000 golf courses in the United States spread over many ecoregions and within a large variety of social contexts, from urban to rural, from forest to swamp, grassland to desert.  Economically, golf courses contribute billions of dollars collectively to the economy and create jobs for local communities.  Environmentally, golf courses require inputs of water, nutrients and pesticides and can be expensive to maintain. While these immediate, direct costs and benefits are fairly well-understood, the indirect contribution to landscape and the public is not as well-understood and beg the questions:  What are the ecosystem service values of a golf course? And how do the biophysical drivers of ecosystem services also affect enjoyment for golfers and other potential course-users?  Can we evaluate the sustainability of a golf course?

For example, the University of Minnesota’s golf course is said to be an important green space in terms of storm water retention and flood mitigation.  How important are other courses and how can we determine the importance of any course in a metro area at providing a suite of ecosystem services? Another unknown is how the supply of a variety of ecosystem services could be influenced by altering the use of a golf course, reducing its footprint or changing the land cover entirely. And how might these changes affect golfer enjoyment? How do we engage and communicate these values to the key stakeholders in the community, such as the Metro Water District, conservationists and nearby residents in the local community?

The first group of ecosystem services we modeled for Twin Cities golf courses were carbon sequestration potential, pollinator habitat quality, and water quality. Our first task was identifying several possible future scenarios of golf courses; what changes would we see if the land was used for an alternative purpose. We came up with nearly a dozen viable options, including a city park, residential development, and commercial and industrial areas. We call this method for comparison the “wallpaper method” (see below three images). We then compared each of these scenarios to the original golf course in terms of their ecosystem service value: how much carbon was stored in the land? Did the amount of water-borne pollutants change? Was pollinator habitat improved or degraded by each scenario? 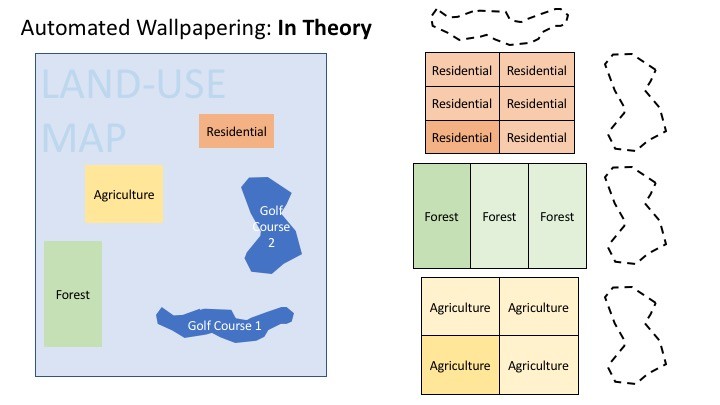 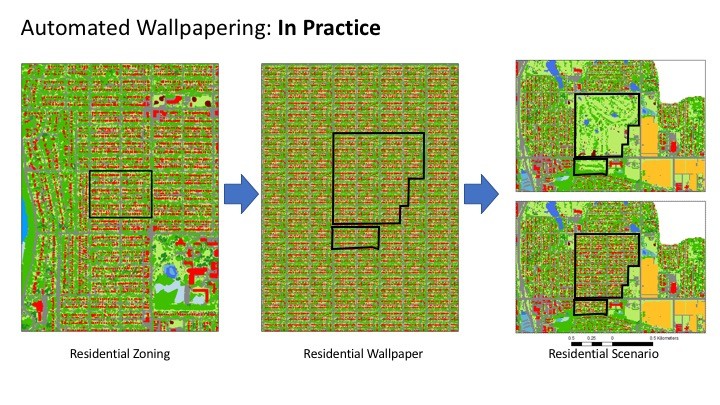 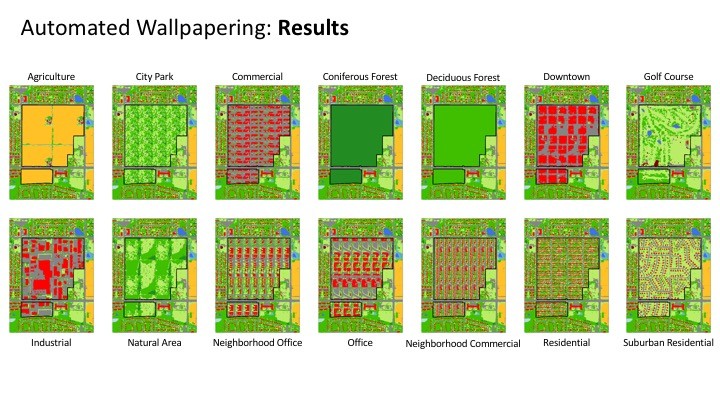 We have calculated the preliminary results and are currently sifting through the initial data from over one hundred golf courses in the seven county metro area. We are also working to repeat this process for other ecosystem services such as urban heat island effect and stormwater retention potential, which we have tested on the University of Minnesota Les Bolstad Golf Course. An important next step is scaling these models to the entire metro area.

Regarding our stormwater modeling, the goal of this task was to provide a preliminary assessment of the potential benefits or drawbacks of the University of Minnesota Les Bolstad Golf Course in terms of its ability to reduce stormwater volumes and associated nutrients relative to other common urban land uses. Retaining stormwater is important for preventing localized flooding and the disruption to downstream lakes and streams caused by high volumes and flow rates of stormwater, and for reducing the transport of the nutrients Nitrogen and Phosphorus, the latter of which is a particular concern for causing algal blooms in urban lakes. The EPA’s Stormwater Management Model (SWMM), a computer program commonly used to simulate the movement of stormwater (and associated pollutants) through urban watersheds in response to rainfall events, was used to investigate stormwater and nutrient transport from Les Bolstad Golf Course, as a golf course and under several hypothetical land development scenarios: low-density residential development, high-density mixed-use development, and a scenario in which poor soil conditions existed on the golf course. SWMM was used to simulate runoff for each scenario using 10 years of observed climate data (see below two images). Preliminary results showed that due to high infiltration rates on the golf course, very little runoff occurred from the course relative to the other scenarios, except during very large storms of 2” or greater rainfall; however, the “poor soil” golf course performed similarly to a residential development. Phosphorus transport from the nominal golf course case was high relative to the other land uses (roughly twice that of the residential development), while Nitrogen export from the course was much less than the other scenarios. Further work will be needed to validate and refine the nutrient transport results. 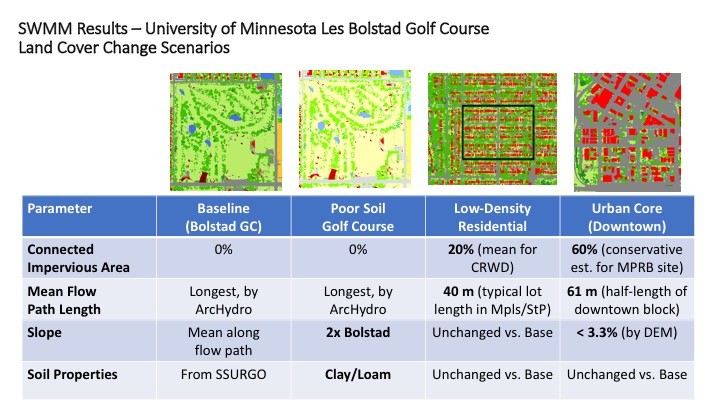 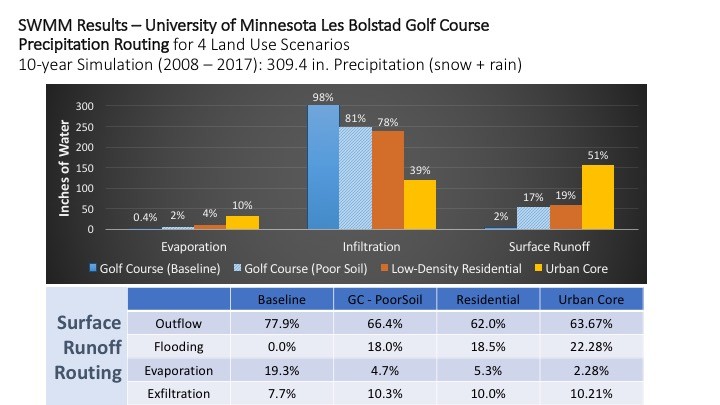 Tags
Science of the Green
natural capital of golf
golf